The anthology Interesting Stories for Children evolves out of the underlying structure of Nepali culture which has the psychology of mythopoetic imagination in its core. The core is the folk culture which still has the innocence of myth. The collection focuses on contemporary issue of conflict and the physical and psychological impacts of conflict on children. The work critiques the present social behaviorism that either misreads or does not read children's minds. The stories invite the readers to be conscious of the most vulnerable group of the society. The narratives both entertain and educate us. A writer who reveals such deep structure of a culture communicates with the essential features of life and its basic systems. The stories written by Kartikeya Ghimire and edited by Mahesh Paudyal are in a very child-friendly language with seriousness of subject matters. Dr. Arun Gupto Reader Central Department of English, Tribhuvan University INTERESTING STORIES FOR CHILDREN AUTHOR : KARTIKEYA GHIMIRE TRANSLATOR/EDITOR : MAHESH PAUDYAL SIZE : 250 PAGES PRICE RS. 205/- PUBLISHED BY : KETAKETI MEDIA PVT. LTD. AVAILABLE IN THE MARKET FROM PAUSH 15, 2068.

'Nobody can stop us looking at the stars though it is impossible to touch them. Looking at them keeps our head always high.' This is what Anjana said in our short conversation with her. Anjana Rajbanshi, a smiling, clever and diligent lady, is a permanent resident of Juropani-6, Jhapa. She was born in a middle-class family 17 years back. Studying in an ordinary private school, Miss Rajbanshi topped all the lady candidates in the final SLC Examination 2062, and proved that one does not need an advanced institute to be the winner.
Anjana Rajbanshi is such a rare and beautiful flower that needed neither an expensive park to be bloomed nor a highly-trained gardener to be trimmed. Miss Rajbanshi, a daughter of Pahadsingh and Gausari, started her schooling in an ordinary private school. She attended the classes and performed the assignments. Because of her regular practice and desirous study, she did not feel so difficult to step at the apex of success. She used to read four to five hours daily except school study. At school, she was interested in both curricular and extra-curricular activities. She had been the editor of wall magazine of her school. Quiz, debate, oratory, essay writing etc. were her favorites. Because of her skill, she has already become first in National Essay Competition.
Miss Rajbanshi, though studying Science, believes in invisible power. It is the same power, she says, that inspires her to march ahead in her life. She is very clever to cross-question others and defend her own arguments. She advises others not to run after the definition of life, but rather struggle to do something better. So, for her, life is struggle. Time is always fluctuating. It is why we must be dynamic and cunning to hold its pace. She is very cool, smiling and sensitive. 'I get never angry,' she says, 'but I start weeping when I see my mother sad and unhappy.' Miss Rajbanshi does not have any high ambition in life. In future, she aims to be a normal lady. She does not believe in sex division. She thinks that there is only one sex in nature: human being. She philosophically says, 'Let's not fight in the name of male and female, but move ahead hand in hand for the prosperity of mankind.'   (Source : Garden, Monthly- 2063 BS)
on November 09, 2011 No comments: 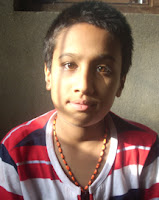 Kartikeya Baal Pratibha Puraskar Kosh (Kartikeya Child Talent Award Trust) has been established with a sum collected as remuneration for his writing by Kartikeya Ghimire, who writes for children. The Trust has been, for last ten years, working to promote children's talent. Till date, as many as forty children have been awarded with Kartikeya Child Talent Award. The trust identifies children enduring through difficult socio-economic predicaments, and yet, dauntlessly moving ahead to carve for themselves a bright future. Every year, the awardees are conferred felicitation letter with a sum of Rs. 10,001/- in a colourful ceremony.
The Trust has also been working to promote creativity and reading habit of children who come from backward and marginalized sectors and communities. Its founder Kartikeya Ghimire, and Secretary and author Mahesh Paudyal have visited more than 30 districts organizing storytelling and writing sessions and children's literary meets. Their movement is still going on. Only that, they need more helping hands to help them continue!
How can the Trust be assisted?
·                     By taking its life membership
·                     By taking its annual membership
·                     By assuming its patronage
For life members, the membership fee has been set at Rs. 5001/- while for annual member, it is Rs.1000/- only. To assume its patronage, the interested donor is expected to pay Rs. 5,00, 100/- only.
The donors shall be introduced in detail, along with their photographs on a coloured page of our monthly mouthpiece Ketaketinews Monthly Magazine.
on August 28, 2011 No comments: 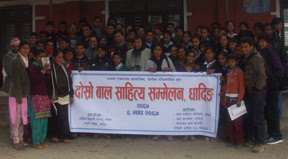 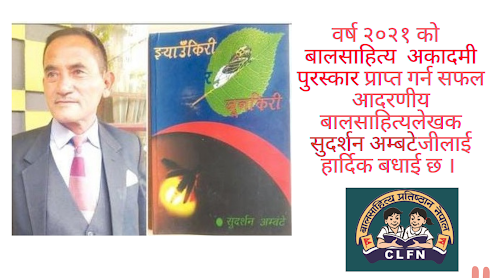